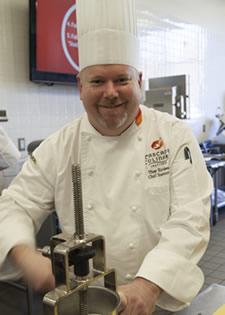 Thor Erickson, a culinary instructor at the Cascade Culinary Institute, likes to say that his culinary career chose him. His father owned several restaurants in the San Francisco Bay area, and he grew up working in them. Although he had many interests while he was growing up, he always came back to culinary.

Before he became an instructor, Thor worked for 29 years at many restaurants, including Chez Panisse in Berkeley. He also trained as a butcher in Italy and Germany.

"My favorite part about working as a chef in the industry was teaching younger co-workers the right techniques for the job, so when I was given the opportunity to teach at COCC, I was thrilled," he says.

"I take what I learned from years in the industry and help students learn what it takes to be successful and to never stop learning," says Thor. "Learning is the best part of my job. I learn so much everyday from my colleagues, from my students, and from myself. It's the greatest job!"

Thor was one of eight chefs recently chosen by the International Association of Culinary Professionals to report to the White House. He spent nine hours teaching the White House kitchen staff how to cure and preserve a whole pig. "I was very honored, and I tell my students, if I can it, you can do it. There's nothing special about me."