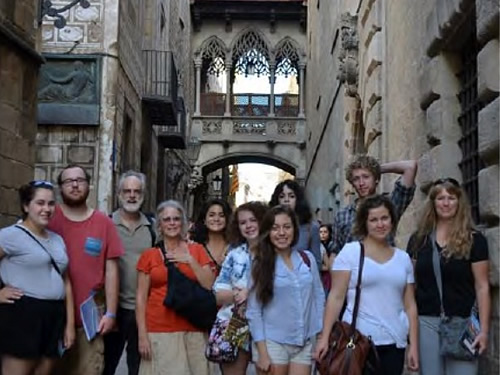 COCC's fall 2015 study abroad program intoduced nine community college students to the art, culture and traditions of Barcelona, Spain. Speech and Writing Progessor Jon Bouknight tailored his courses to fit the locale: Media and Intercultural Communication students regulary learned in situ: joining in the October Book Fair on Passeig de Grácia or visiting the Museo de Cultures de Món and the Musea Etnológico. The classes canvassed the streets around Placa Catalunya and Las Ramblas, creating self-guided tours of locations from Carlos Ruiz Zafon's Shadow of he Wind and George Orwell's Homage to Catalonia. The Intercultural Communication students caught the world-famous FC Barcelona fútbol team in action at Camp Nouse; this activity was a culmination of extensive reading on the long-running rivalry between Barcelona and Madrid. COCC drama students attended two theatrical productions, Husbands and Wives and Much Ado About Nothing, both performed in Catalan. Using plays from the Golden Age of Spanish Drama to the contemporary Barcelona: Map of Shadows, these students also orally interpreted select scenes in the Greek Theater on Montjuïc—the outdoor stage was the students' choice.

Beyond coursework and culture, these students had the life changing experience if international travel and many plan to return to Spain. One student wrote, "During my time in Spain, I didn't leave the country, but it was amazing getting to know other parts of Spain. I got to go to the North of Spain, Madrid, and some towns on along Costa Brava. As much as I enjoyed those places, the feeling of coming back home to Barcelona was the best! There is always something going on here, and I love that so much. This was my first time leaving home, and I'm so glad I got to spend it in Barcelona!"