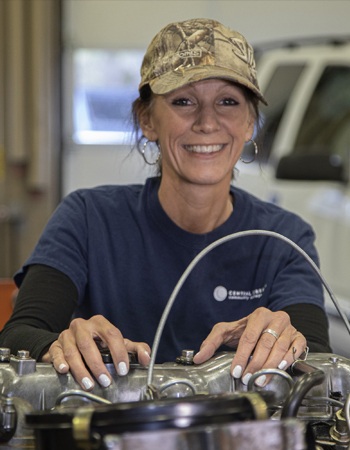 When Amy Bachman signed up for an automotive class, she did so with more than a measure of trepidation — it had been 25 years since she was last in a school setting and her engine knowledge was nominal. But two things spurred her on: The prospect of teaching her own children about vehicles and the determination to expand her education.

Not long into the program, the single mother of four discovered it was a dream fit. "I realized how much I enjoyed this work and what I had learned in such a short amount of time," she shares. "I decided that this was what I wanted to do for a career."

Bachman is now earning a Master Automotive Technician certification and an Associate of Applied Science degree in Automotive Technology in Electronics and Diagnostics. Along the way, she became a tool room assistant and now serves as the program's Outreach Liaison. She hopes to pursue a position in electric vehicle repair or programming. The recipient of the College Automotive Repair Scholarship (CARS), Bachman was selected as one of four students to represent the College on the 2020 All-Oregon Academic Team.

"It's very satisfying to feel confident in myself when working on my own vehicle," she says. "My COCC instructors have given me a confidence in myself. Not only confidence working on vehicles, but in life in general. Because of them believing in me, it's made it easier to believe in myself."