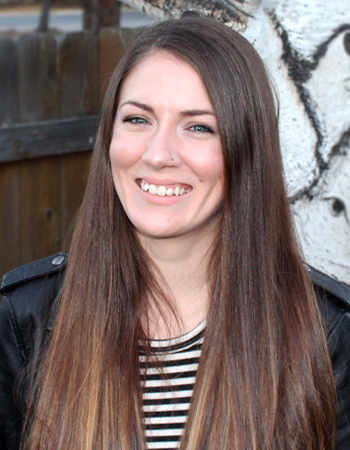 With a talent for making blissful, tiered towers with fondant icing, wedding cake designer Chyna Kennedy thought her career would naturally take the path of a trained pastry chef. But her creative focus — and her professional aspirations — began to nudge her in a different direction. Writing, rather than frosting, started to become more of a chosen medium for expression.

"I changed paths and decided I wanted to be a journalist. I wanted to write and give a voice to those who don't have one," says the communication student, formerly of Eagle Point, Oregon. "Once I've completed my program, I want to start freelance writing as well, focusing on issues involving human rights and the justice system."

Along the way, Kennedy has discovered an interest in the marketing side of communication, spurred by work where she's handled social media platforms and other marketing focuses. She added a minor in marketing to her Associate of Arts Oregon Transfer degree and soon plans to further her studies through Oregon State University's E-campus.

Kennedy's academic dedication and dean's list status earned her a place on the 2022 All-Oregon Academic Team. The accolade took her by surprise.

"I was never a 'strong student,' and I never thought I would attend college," she shares. "Growing up, my language arts classes were among my favorite, but I had a tough time staying focused and following class structures." At COCC, things began to take focus.

"When I started my first term at COCC, I was nervous and afraid that I had committed myself to a task that I was doomed to fail," she adds. "Since that first term, I believe I have grown more as a person than I ever would have imagined. From the moment I walked through the doors of my first communication class at the Bend campus, my life has forever changed for the better."