*Lankford will discuss "Becoming Leonardo" at 6 p.m., Monday, May 21, at the Coats Campus Center, as part of the Nancy R. Chandler Visiting Scholar Program of the COCC Foundation. This is a free event, open to the public; RSVP to reserve a seat.

"Why are there no more Leonardos?" asks author and COCC writing instructor Mike Lankford in his latest book, "Becoming Leonardo," a da Vinci biography that made the Wall Street Journal's Top 10 Nonfiction Book list of 2017. "I think the truth," he posits, "is there are potential Leonardos everywhere in the world but they rarely survive or succeed in our regimented social order, and they don't do at all well on tests."

Lankford, who joined COCC in 2006 and has taught creative writing, creative nonfiction and academic composition as a part-time instructor for the college, has been fascinated with da Vinci since high school. His habit of exhaustively reading material by and about one particular individual—which started at age 20 when he lived in a remote Oklahoma farmhouse and was consumed with Tolstoy—doesn't normally lead to writing a book of his own, he admitted. A biography he read on da Vinci some five years ago changed that.

"Immediately afterward, I had 20 more questions than before I'd started the book," the author explained. He began reading more biographies, larger biographies—multiple times. He estimated he read roughly 50 different works. "The more I studied Leonardo, the more mysterious he became." Discovering that an "agreed-upon script" guided most of the scholarly works on da Vinci, Lankford set out to peel back the mythology and take a fresh look at the iconic individual.

"What I tried to do was tell the story of his development," he said. "And that is not as inaccessible as a lot of people would think. We know a lot about theory of mind at this point, development of identity—you get a sense of a cohesive personality." Part of the process, he explained, was rethinking commonly held interpretations of da Vinci's work logs or journals.

The book alternates points of view, at times speaking from the 21st century back to the 15th century while also offering an in-the-moment perspective. "What that does is that gives you Leonardo's point of view," he said. Readers get a sense of Florence at the time, of lesser-known personalities. The resulting work is something the author has dubbed a "renegade biography."

"Becoming Leonardo" also appears on The Spectator's 2017 Books of the Year list. It's on the finalist list for the 2018 Oregon Book Awards. Lankford's memoir of being a white drummer in an African-American R&B band, "Life in Double Time," was an Amazon editor's pick and deemed best music book of the year by eight newspapers, including the Chicago Tribune. A graduate of the Iowa Writers' Workshop, Lankford is currently working on a novel. 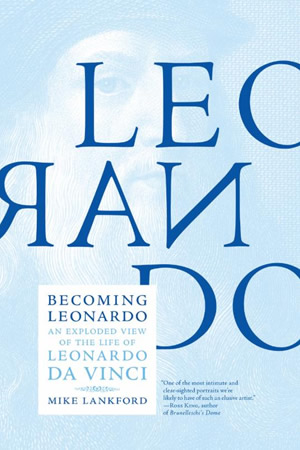