Following a tragic loss, a family finds kindness and remembrance through a volunteer-built woodworking project

It’s a handsome Shaker-style floor cabinet, the kind of compact and useful piece of furniture that seems welcome in any room in the house. Built with solid mahogany, its clean design draws on interlocking dovetails and mortise-and-tenon joinery—“honest” construction, as woodworkers like to say—that gives it a time-tested heirloom quality. Like many pieces of furniture, it has a story. This one begins with heartbreak.

Bob Turner, a Tumalo attorney who once specialized in social justice law, was just beginning an advanced woodworking class this past winter with the Continuing Education department at Central Oregon Community College. He’d done plenty of work with his hands before, including rehabbing a home on the Navajo Reservation, where he and his wife, Courtney, lived for a time while he provided legal aid to members of the Navajo nation.

He’d even crafted some furniture, gravitating toward the humble aesthetic of the Shaker tradition. But things like dovetails and band saws have a way of calling you back for further refinement—clouds of sawdust like a baptism. So he signed up for the class.

Held at the Sisters High School woodshop, the class was scheduled to unfold over a month and a half, meeting one night every week. They’d barely gotten started. But Bob had already picked a plan for his project and framed up the cabinet, sourcing a stack of mahogany in his barn. It was to be a birthday gift for his daughter, Hannah.

In February, returning from a vacation to New York City, Bob and Courtney found late-season, record-setting snowfall piled high on their Tumalo property. Priority number one—after wading through the drifts—was to stoke a fire to warm their home. Bob went out to chop wood, and in the handling of log chunks, he scraped his hand slightly. It seemed like a minor wound. But rather quickly, a major infection began to kick in.

The couple thought it was the flu at first. His eyes, though, were somehow off. Concerned, they went to St. Charles Bend, where they would soon meet with a team of what seemed like every infectious disease specialist in the area. His body, they learned, was having an over-the-top reaction to a basic infection. “He got sepsis,” Courtney explains. His condition wouldn’t improve and so he stayed on at the hospital. With a compromised immune system and a weakened heart, they were told surgery wasn’t a realistic option. “He fought it for a long time,” shares Courtney. But his organs could only withstand so much. Bob passed away on April 16 at the age of 67.

Gabrielle Franke, his woodworking instructor, was greatly saddened by the news. And when Courtney reached out to see if the project—still in rough form—might somehow be finished, Gabrielle and two volunteer assistants from the class, Brett Hoyt and Chris Frazeur, poured themselves into it.

Courtney brought the remaining pieces over in her Subaru and the woodworkers followed Bob’s plans and notes, cutting, fitting and sanding the piece to completion. When they applied the clear finish, the wood shone brightly. “It felt like a real honor,” says Gabrielle. “We all liked him.”

At Bob’s memorial service, the house was packed. “People came from all over,” says Courtney. “He was well-loved and he was really funny.” The cabinet was there, too, finished just in time and providing a tangible connection to Bob and something he was creating. Gabrielle was among those who spoke. People remembered a man who was an ardent environmentalist and an advocate for low-income populations who established Central Oregon’s first legal aid office. They also remembered a woodworker.

Heirloom furniture pieces have a way of becoming members of the family. And with homemade furniture, it’s as if the spirit of the woodworker is forever engrained in the form. The trio of woodworkers who helped complete Bob’s cabinet will always be part of its story, a reminder of how they sought to make sure his memory would live on in his final project. It’s a measure of comfort that will endure. 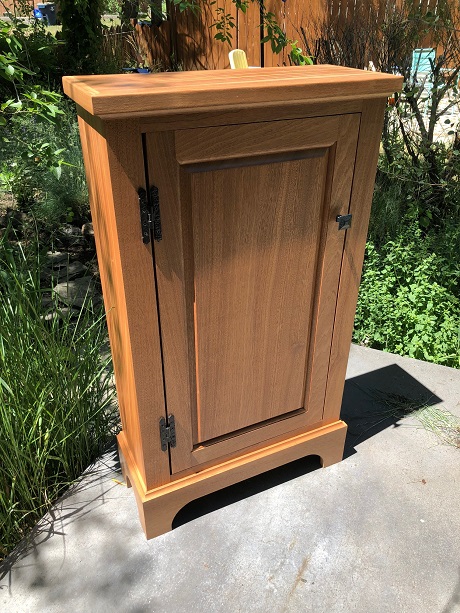