The Glass Age is Now

Glassware has been central to the progress of chemistry as much as chemistry has been central to the development of glass. This fall, Dr. Zelda Ziegler, COCC associate professor of chemistry, returns from a two-quarter sabbatical leave with a better appreciation of how these two important fields have progressed together. This sabbatical allowed her time to visit some of the landmarks of glass progress and practice including Venice and Florence in Italy, Philadelphia PA, and Corning NY. What follows is a description of what she saw in these places as well as some results of her own studies here at COCC.

Glass in some form has been known and produced by humans for 35 centuries. Beads, vials, and glazes sustained the technology of glass until Venice, Italy isolated glassmakers on the island of Murano in the Venetian lagoon. There, the close proximity of glassmakers and glassworkers helped the technology of glass develop to the extent that Venice dominated the glass market for centuries. It was on Murano that methods borrowed from chemistry made it possible to control the color and clarity of glass. This led to the first recipe for colorless glass, cristallo, around 1450 AD. As it turns out, the recipe relies on some exemplary oxidation/reduction chemistry. A visit to Murano was an excellent chance to survey the high level of glassmaking skills practiced in the historic glassworks that still exist there. The Murano Glass Museum gives a splendid overview of the progress of glass throughout the period of Venetian dominance of the world glass market.

As glass practice spread from Venice, glassmakers were pressed into the service of science. Florence's Galileo Museum features a remarkable collection of early thermometers. Since water was the working fluid, these early scientific instruments were nearly one meter tall. The ornate decoration on the bulb end of the thermometer was not functional, but probably the work of a glassblower recently employed in making decorative items for the tables of the rich and powerful. One solution to the problem of the unwieldy height was a spiral wound glass column in a later version of the thermometer. The stem and foot are clearly familiar from wine glasses of the period. Many other important milestones of scientific glassware are featured in the museum of scientific apparatus called the Fondazione Scienza e Tecnica in Florence. 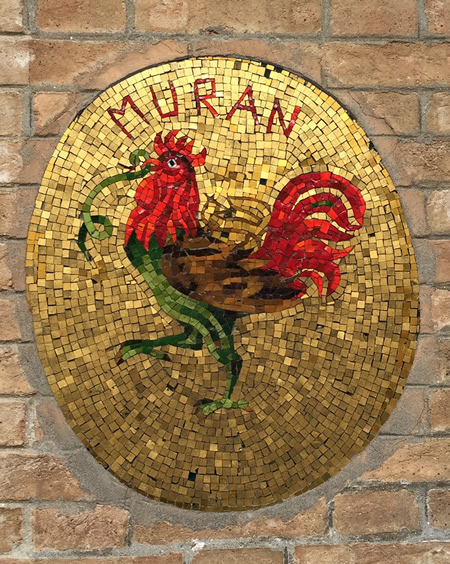 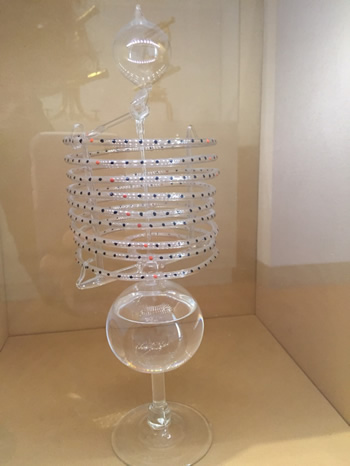 Spiral glass tubing thermometer: This is one way to shorten a water column thermometer. Glass spirals appear in other types of laboratory equipment.

A reliable recipe for colorless glass led to technological developments in many disciplines. The ability to grind glass into lenses led to new ways of extending the limits of human vision. Lenses were employed in telescopes, microscopes and eyeglasses. Each of these inventions caused its own downstream impacts on society and science.

The colorless glass available at the time of early microscopy practice caused a problem called chromatic aberration. An exhibit of the history of the microscope in the Corning Museum of Glass shows some of the early models of microscopes along with some of the images visible through them. This presented a clear case for the impact of microscopy on medicine and public health, and supported the urgent call for a better recipe for glass.

In response to this call, German Otto Schott did a painstaking systematic study of more than 100 chemical formulations of glass in 1875. This effort gave better glass for microscopes, but more importantly from the point of view of a chemist, it gave a much more durable glass suitable for use in the chemistry lab. Early types of glass were formed into transparent and inert glassware, which made it possible to isolate and concentrate the mineral acids, discover new elements and produce compounds never made before. But the fragility of this early glassware made using it a dangerous and expensive proposition. Schott's new durable glass, called Duran, was an answer to the problem of ultra fragile laboratory glassware. Duran's formulation was protected by patent.

Before the First World War, the American government declared Duran glass a strategic material and a call went out for an acceptable domestic substitute. It was essential to have transparent covers for railway switching lamps that would not break in bad weather. Corning Glassworks in Corning, New York came up with their own formulation of a similarly durable glass to meet that need. That glass, released in 1915, was called Pyrex.

Most of the compounds Schott, and later Corning, added to these glass formulations included elements from a part of the periodic table that chemistry teachers rarely get to talk aboutthe metalloids. Most notably, compounds of Boron were added to make the more durable glass formulations. The formulations are called borosilicate glasses. These types of glass are still the darlings of the chemical laboratory.

Borosilicate glass tubing can be fashioned into glass apparatus using a bench top burner. Many chemists (Dr. Ziegler included) learned how to make glass apparatus as a part of their chemical training. With this skill, it is possible for chemists to imagine equipment, build it and then test it. Many of the designs of the standard chemical glassware kit came about from chemists designing and making their own equipment. Good designs survived and inspired others.

To display the charms of some borosilicate glassware, Dr. Ziegler used a thermal imaging camera borrowed from COCC's Automotive Program. This false color image shows a 50 degree C temperature difference in less than 5 mm of glass at the top of this Soxhlet extractor. Borosilicate glass can withstand temperature differences this large and greater without breaking or causing leaks in the joints which would be very likely in lesser formulations of glass. 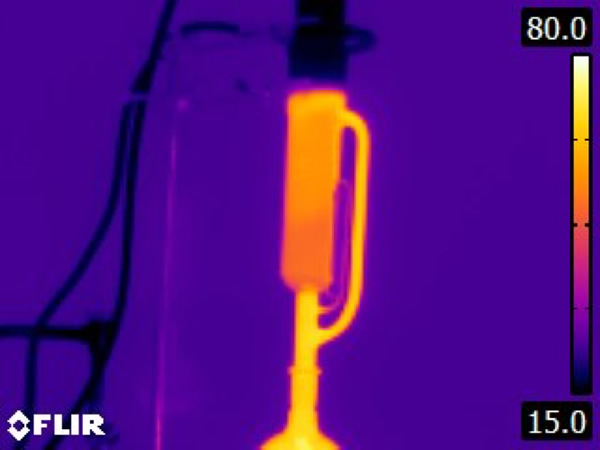 Extraction cycle: The colors of the image correspond to the different temperatures of the glass apparatus. 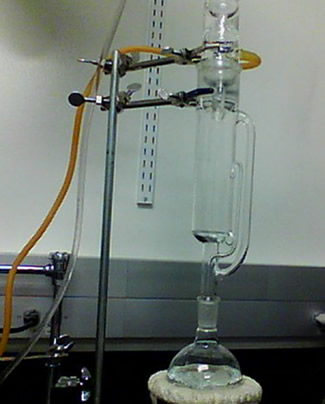 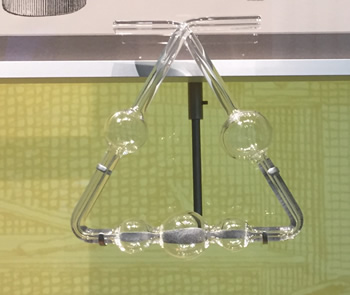 Liegbig's Kaliapparatus enabled students to determine the carbon content of a compound quickly and easily. It was one of the more famous pieces of equipment in his pharmaceutical teaching laboratory.

In Philadelphia, the Chemical Heritage Museum exhibits an example of a piece of equipment that is so important to the discipline of chemistry it is featured in the logo for the American Chemical Society. The apparatus, the Kaliapparat, was developed by Justus von Liebig for use by his pharmacy students to determine the elemental composition of chemical compounds. The fact that Liebig taught pharmacy students with the Kaliapparat and other glassware transformed the way chemists as well as pharmacists and medical professionals were taught.

Thanks to the time available due to the sabbatical, Dr. Ziegler was able to participate in a webinar on the theory and material science of Corning's Gorilla Glass, the glass used in smart-phone faceplates. Research and development in glass continues at Corning. Corning announced the release of Gorilla Glass 5 this month. Other new technology in glass research and development is making contributions to solar panel technology. Glass is everywhere and still essential and relevant to our lives. We are still in the Glass Age.