*Update 3-11-2020: Both performances of Evolve have been canceled. Event organizers are hoping to reschedule at a later date. We'll keep you posted!

Real-life racial profiling stories and interactions between police officers and people of color are portrayed through a series of powerful monologues in a show titled “Evolve,” playing at the Tower Theatre at 7 p.m. on both March 13 and 14 (Event Canceled) as part of Central Oregon Community College’s (COCC) 2020 Season of Nonviolence.

The shows are free and open to the public; reserve spots at towertheatre.org. Recommended for ages high school and above.

Staged by Portland-based The Red Door Project and hosted by the COCC Afrocentric Studies Club, the performance melds monologues from The New Black Fest’s “Hands Up: 7 Playwrights, 7 Testaments” with material from “Cop Out: Beyond Black, White & Blue,” which draws on real police interviews. The show aims to open dialogue between communities and police departments, to foster an evolved understanding. After the show, the audience engages in facilitated discussion.

The national Season of Nonviolence honors the legacy of Dr. Martin Luther King Jr., Mahātmā Gandhi and others who believed in nonviolent efforts to advocate for human rights. 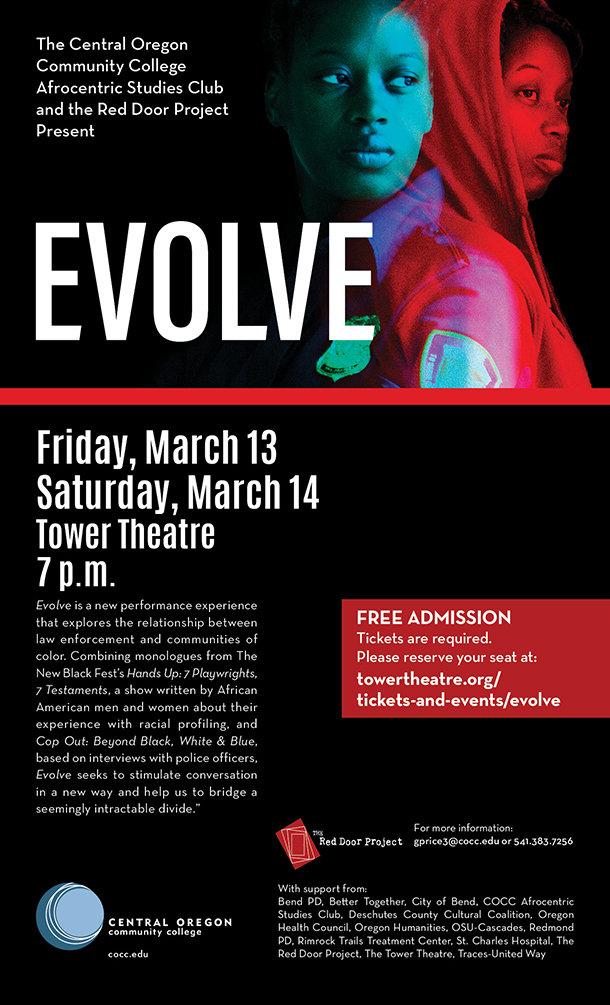