A World Away, in a Nearby Classroom

The freezer in Tim Neville’s house is starting to resemble a faraway land.

Inside it, the travel writer has methodically relabeled his family’s frozen goods, concealing the English words with Mandarin characters as a means to reinforce his Chinese-language studies. While the method seems to be working—his skills are rapidly progressing—his wife, understandably, still gets a little irked when it’s her turn to cook.

“I get kind of obsessive about it,” admitted the Bend-based freelancer, who writes for publications like the New York Times and Outside magazine. “It’s permeated all aspects of my life…my Siri is set to Mandarin.”

Before the obsession kicked in, before his freezer experienced an identity crisis, the realities of being on assignment in China—of, say, tracking pandas in the Sichuan Province—proved dizzying. The constant sight of intricately scripted language characters eventually forced Neville to avert his eyes while gazing out bus windows.

But that won’t be the case when he returns for his next assignment. The writer is now in his third Mandarin class at Central Oregon Community College (COCC), a place that he was surprised to learn even offered the language training. “The fact that I could do this here in Bend just blew me away,” he said.

From Italian and German to French and Spanish—and, since 2015, Chinese and Kiksht (a language of the Wasco tribe)—the World Languages program at COCC provides a vibrant educational platform for cultural exploration.

“We love our languages,” said assistant professor Fleur Prade, who teaches both French and Italian at the college. “We’re very passionate about it.”

Some COCC faculty members, like Paris-born Prade, are native-speaking instructors. Others, like Josh Evans, associate professor of Spanish, have achieved heights in their field—his recent sabbatical to the southern coast of Spain centered on earning the Diploma de Español como Lengua Extranjera, the pinnacle in Spanish certification for a non-native speaker.

“We love our languages,” said assistant professor Fleur Prade, who teaches both French and Italian at the college. “We’re very passionate about it.”

While COCC doesn’t offer a degree in language studies, credits can fulfill some of the requirements for an Associate of Arts Oregon Transfer degree. This popular two-year academic path at the college lays the groundwork for pursuing a bachelor’s degree; second-year language proficiency is a must-have for many university bachelor’s programs.

Professor Rebecca Walker-Sands, interim chair of the program, sees these subjects as something more: a key ingredient to a complete learning experience. “The cultural awareness inherent in the language classes…helps foster a global awareness essential for surviving in our connected world,” she said.

Lin Hong has built her curriculum with that in mind. The assistant professor, who launched the college’s Chinese program after serving out academic posts at Clemson University and Penn State, knows that China’s expanding role in the world necessitates an emphasis on Chinese studies. She teaches Mandarin, Chinese film and, soon, a class in contemporary China.

“Those interests are very important to this generation of our students, and to this country,” she said. Furthering that commitment, Hong has helped bring Chinese programs to Sky View Middle School and Mountain View High School. This fall, she’ll augment her role at COCC by teaching Mandarin at Summit High School.

Other language and cultural opportunities add layers to the COCC experience. An ongoing calendar of cultural events—from a Chinese Lantern Festival to German film nights—helps enhance the learning environment for students. Most are free and open to the public.

For community members seeking language lessons, if enrolling as a student (as Neville did) isn’t a realistic option, some classes are offered through the Continuing Education department. Going a step further, a new Spanish-language-meets-summer-camp experience, the Central Oregon Summer Spanish Immersion program, pairs all levels of instruction with tasty cuisine and tango lessons.

The college also taps into a study abroad program—run every other year—that opens up learning opportunities in places like Italy, Spain and Costa Rica. “It’s cool seeing students come back after having been abroad and seeing how they’ve changed both in how they approach language and just how they approach life in general,” said Evans. “Being thrust into the situation of being a foreigner…is something everyone should have to experience.”

At a recent French class on the Bend campus, things seemed unquestionably foreign. Students of a second-year course took turns reading aloud from a 19th-century work of literature, as assistant professor Prade moved among them, book in hand, occasionally affirming with a soft “très bien” or gently tweaking a pronunciation.

And even when the readings stopped, the discussion continued on fluidly in French. On the other side of the door, while Central Oregon carried on as usual, students in that room, moored to that moment, seemed a whole world away. 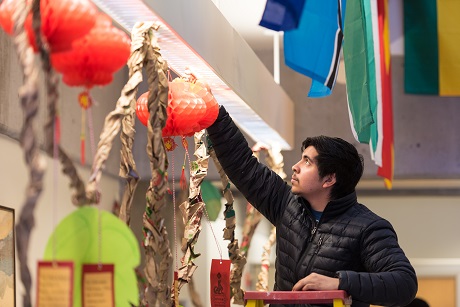