Central Oregon Community College is now an officially designated “Medal of Honor College” following a resolution by its board of directors to honor Robert Maxwell, the oldest living recipient of the Medal of Honor and a formative faculty member in the college’s automotive technology program. An accompanying resolution officially named COCC’s veterans services center the Robert D. Maxwell Veterans Center.

“This is a unique, meaningful way for us to pay tribute to Mr. Maxwell,” said John Mundy, chair of COCC’s board of directors. “It honors his valor and his service to our country, while also recognizing the impact he’s made as a talented educator and as a tireless supporter of veterans.”

Maxwell, 98, who served in Europe and Africa during World War II as a U.S. Army communications technician, received the nation’s highest military honor for throwing himself on a German grenade in a battle near Besancon, France, on Sept. 7, 1944, to absorb the explosion and save the lives of others in his squad. He is also the recipient of the Silver Star, two Purple Hearts, a Bronze Star and two French honors, the Croix de Guerre and the Legion d’honneur.

Following the war, Maxwell settled in Oregon and used the GI Bill to study automotive technology. He became an automotive instructor, first teaching at Bend High School in downtown Bend before helping COCC launch its automotive program in 1958, where he served as an instructor for eight years. He spent the remainder of his career with Lane Community College and later retired to Bend.

At present, some 435 credit-seeking students at COCC are veterans. The college offers an automotive training scholarship in Maxwell’s name, sponsored by High Desert Automotive. 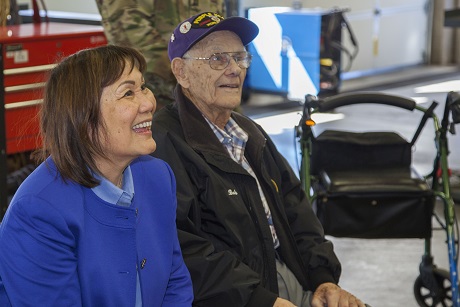