Training for the Tech Sector

Future coders and network techs will find a range of certificates, degrees at COCC

The data is in.

As Central Oregon tech start-ups are gaining traction and established firms are expanding, a new survey from the Technology Association of Oregon (TAO) signals that some 450 tech jobs will be added to the local economy this year. And that only accounts for the 28 percent of businesses that responded, according to Teri Hockett, head of TAO-Central Oregon.

Reinforcing the region’s potential, the Milken Institute just named the Bend-Redmond metro area number one—a repeat performance—among small cities of the nation’s best-performing cities, citing tech opportunities as a factor. Meanwhile, Apple and Facebook are adding to their place in the industry’s landscape by announcing bigger data centers for Prineville.

“It’s only going to go up,” said Ralph Phillips, department chair of Computer Information Systems (CIS) at Central Oregon Community College (COCC), referring to the entire industry. In fact, the U.S. Bureau of Labor Statistics projects that jobs in the computer and information technology field will grow by 13 percent between 2016 and 2026—outpacing other occupations.

And while there is certainly a steady demand for experienced programmers and veteran engineers, there are positions across the spectrum for those new to the field. At Kollective Technology, a global software firm headquartered in Bend, recent COCC graduate Brett Bascom is working as a quality assurance engineer.

“My position boils down to five areas of testing and certifying software,” he said. “This means working hand in hand with the development engineers who are writing the code for our front- or back-end applications to ensure it’s delivered with as few bugs—ideally, none—as possible.”

Bascom, who recently earned his Associate of Applied Science degree in CIS, shared that he wasn’t aware the job category even existed until he started his studies. “There are myriad possibilities in this industry,” he said. “Until I actually started the program, I had no idea how much passion I would have for it.”

At COCC, there are several computer studies degrees and a range of certificates. The school’s two-year CIS degree is a general-focus computer systems degree that incorporates a set number of core classes, plus electives. A student can also specialize in certain areas—essentially the same degree with specific concentrations, such as computer-aided drafting, or web development, or perhaps networking.

The latter is Otmar Borchard’s focus. Borchard is working as an intern at Bend Research while he completes his CIS studies. “A large part of my job,” he explained, “is figuring out how to better solve business challenges with all the great new computer technology coming at us. My role is to help my co-workers be more effective at their jobs by ensuring the computers and networks they rely on function properly.”

Someone with network skills could potentially work at a data center as an entry-level network administrator, said Phillips, although some extra skills might be required. “Students get Linux operating system experience, which is what they often use at the data centers,” he said. “They will have gone through computer hardware, they’ll understand about swapping out drives, which can be a common task for an entry-level admin person at a data center.”

Another degree, newer to the college, is the Associate of Science Oregon Transfer degree in computer science. This programming-routed degree readies students for continued study at a university, where they can plan for careers in software engineering and database system development, among other specialties. OSU-Cascades offers a computer science program for those eyeing the transfer option.

For CIS, over 90 percent of the classes are available online; several of the entry-level classes are offered at all four campuses. Additionally, the department is working on an online CIS degree, with hopes to have it starting up in the next year or two.

“Whether you decide, ‘Do I want to complete a degree here, or do I want to pursue computer science at a university, or do I want to change my path to business?’ having that computer background, in a lot of different fields, is going to help,” said Phillips. “We give students the technology foundation they can use in many facets of their lives.”

Borchard was glad he took the plunge. “I had been away from school for a long time so I was a little apprehensive when I signed up two years ago at COCC,” he said. “I wish I had done this sooner.” 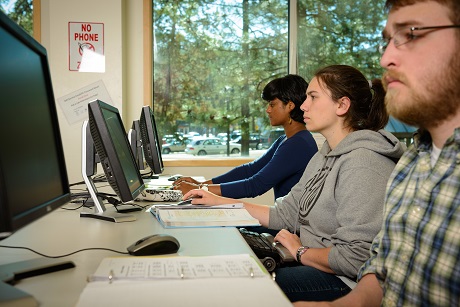