Most investors would gladly welcome returns that hit the seven-percent mark. According to Forbes, the Standard & Poor's 500 index did just that between 2004-2014, delivering an average annual return of 7.2 percent. Recent findings from an independent economic-impact firm reveal that taxpayer investments in Central Oregon Community College (COCC) during the same decade tallied an even stronger rate: 8.2 percent. This value, calculated by forecasting student earnings and an accompanying reduced role of governmental resources, greatly contributes to the growth of regional and even statewide economies—it's a shared social dividend that pays off in broad, concrete terms.

"This study spotlights the valuable, intrinsic role that COCC plays in our communities and region," said Dr. Shirley Metcalf, COCC's president. "And what's really encouraging is that the investments made—across the board—are producing tangible, meaningful results and benefits that are affecting us all."

For the 2015-16 year, COCC served 9,460 credit students, 6,825 non-credit students and employed 573 individuals. Data reveals that the college and its students added $237.6 million in income to the district's economy. Emsi arrived at its numbers by examining COCC's payroll, student expenditures and contributions of past students currently employed within the regional workforce.

For the students themselves, the study discovered, tuition dollars result in $3.20 in higher future earnings for every $1 that students paid, with an average annual return of 12.8 percent. Long-term, over their working lives, COCC's 2015-16 students are estimated to increase the state's economic base by some $676.1 million. Additionally, students who earn an associate's degree earn an average of $9,000 per year more than those who do not go to college. For those who then go on to earn a bachelor's degree, income levels increase by an average of an additional $13,000.

Contributing to COCC's overall impact, individuals who achieve higher levels of education are statistically more likely to find better employment opportunities and to develop better lifestyle habits. For 2015-16 students, this, in turn, leads to savings to students and to society as a whole—be it related to things like smoking, alcoholism, obesity or drug abuse. They're also less likely to require earnings assistance or commit crimes. Savings to society amounts to a present value of $20.4 million in avoided costs related to health, crime and unemployment.

Emsi calculated that "society" invested $121.8 million in COCC educations—which includes all COCC expenditures, student expenditures and all student opportunity costs. In return for this investment, society receives a present value of $696.5 million in benefits, the sum of the increased economic base and social savings that the 2015-16 student population will generate in the state. For every dollar spent on COCC, society as a whole in Oregon will receive a cumulative value of $5.70 in benefits. 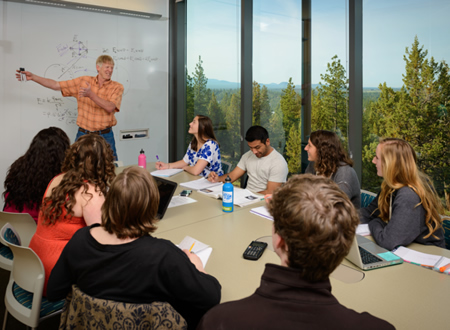