The "Shirley Ray," named for its donor, will serve as a mobile training tool for culinary careers

The Cascade Culinary Institute (CCI) of Central Oregon Community College recently unveiled its newest teaching tool: a food truck designed to show students how to succeed in one of the fastest growing segments of the restaurant industry. Customized with CCI’s specifications, the mobile kitchen will serve a range of cuisines to the community beginning in January; foodies can track its location at cascadeculinary.com or through CCI’s social media channels.

The program purchased and customized the new truck with an earmarked donation made to the COCC Foundation by longtime culinary program supporter and Bend resident Shirley Ray. Ray passed away earlier this year at age 91 — CCI christened the truck with her name. Ray’s own history has deep connections to the local culinary scene. Her aunt co-founded Bend’s Pine Tavern Restaurant in 1936, where, as a young girl, Ray began working shortly after it opened, shelling peas. Decades later, she helped manage the business.

The “Shirley Ray” features interior cameras so that instructors can observe from outside during training to offer input and feedback. A full range of kitchen equipment fits into the large-scale vehicle, meaning that students can prepare dishes that tap into their complete culinary curriculum, from French cuisine to fine pastries.

“The majority of our students want to work in or own this kind of business,” said chef instructor Thor Erickson, chair of COCC’s culinary department. “Our state-of-the-art truck will not only help train students how to launch their own mobile business, it will also give the community a better chance to taste that success, literally.” Erickson noted that a number of former students have gone on to successfully launch food truck businesses, such as the locally operated Jerk Kings (now a sauce enterprise), Sopa and We’re the Wurst.

“That this was made possible through the donation of Shirley Ray, who knew exactly the trials and triumphs of restaurant work, and wanted her legacy to endure by helping others — that’s what our community and our college are all about,” added Erickson. “It’s where the rubber meets the road.”

Zak Boone, executive director of the COCC Foundation, said the gift will impact more than culinary educations. “That was Shirley’s hope, that this investment would certainly be about learning, but that it would be another way for COCC to connect with our community,” he said. “I see us using the truck for public events, as a rolling ambassador of sorts.”

The food truck sector has been fast expanding nationwide over the past decade, due in part to a smaller up-front investment and ease of business liftoff. Market research firm IBISWorld found that from 2011 to 2016, the sector grew at an annual rate of 7.9%, far outpacing its brick-and-mortar counterpart. The market is attracting celebrity backers and trending in popular culture — Netflix even has a new show, “The Chef Show,” that pairs director Jon Favreau with Roy Choi, a chef credited with helping launch the food truck craze in the U.S.

CCI’s food truck training, akin to its student-operated restaurant, Elevation, will give students real world experience, together with the necessary skills for success. For instance, students will learn how to navigate the regulatory side of things — in Oregon, proposed statewide rules on food handling, storage, refrigeration, construction, inspection and rating of food carts and trucks are expected to take effect in January. 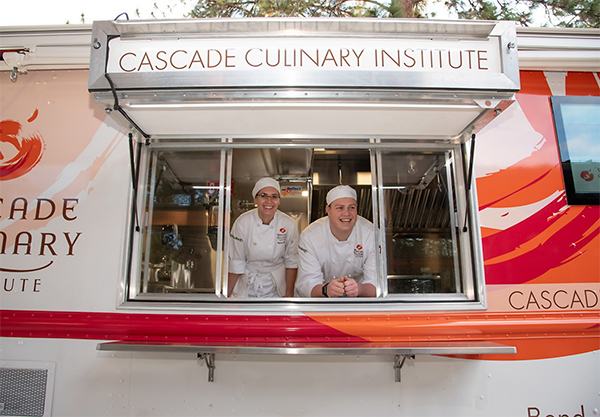