As the Lionshead Fire began to roar over Labor Day weekend, spurred by intense winds across the forests that wrap Mt. Jefferson, Michael Leecy, a lead forest technician for the Confederated Tribes of Warm Springs, was busy mapping out the vital resources that lay in the fire’s path.

Assigned to a team of advisors for both the Lionshead and P-515 fires, the Central Oregon Community College (COCC) graduate focused not only on containment efforts, but also on the potential impacts of battling the blaze — a dozer cut here, a fire retardant drop there — on tribal resources. It’s a fast-moving assessment act.

“As a resource advisor, I work with the fire incident command team in seeing that important tribal resources are protected from the fires and fire suppression activities as best as they can possibly be,” he explained. “Resources like water, cultural plants, fish, wildlife, historical sites, soil and forest.”

Leecy earned his Associate of Applied Science degree from COCC’s forest resources technology program, and is a current part-time student with OSU-Cascades’ Ecampus. He plays an active role in helping manage tribal resources.

“The reservation has a very diverse land base consisting of vast elevation changes that comprise a huge diversity of plant and animal species,” he added. The work can be varied — and impactful.

His job has included timber sale layout, tree marking, GIS work, serving on the tribes’ project interdisciplinary team, wildland firefighting, game survey flights with the tribe’s wildlife biologist and tree species restoration. “As a tribal member of Warm Springs, I really feel a connection to the land base I reside on, and totally within my element.”

For Leecy and other COCC grads, their educations began with an investment in themselves. According to recent findings by Economic Modeling Systems International, which looked at tuition figures and other data from COCC’s 2018-19 fiscal year, an associate degree from the college, on average, will yield earnings of $8,000 more per year compared with no degree.

Another COCC graduate in her element is Brittnye Freeberg, for whom a post-class discussion at the college ended up being something of a career catalyst. Immersed in her biology studies at the time, but unsure of her ultimate goals, she went to office hours one day after a cell lab for a chat “to clarify subject matter” with Meredith Humphries, assistant professor of biology. Freeberg found clarity that went beyond a cellular level.

“We had a stimulating conversation about the options in the health field for someone like me, who doesn’t necessarily want to be a doctor or a nurse that has to poke people,” she recalled. For the busy mom of three, already intrigued by the field of medicine and helping people, it not only validated the path she was on, but it helped better plot her trajectory.

“My work includes chemical and physical stability testing of compounds that have been through the early stages of formulation optimization,” she explained. “When we successfully formulate and optimize a compound that was poorly soluble and poorly bio-available to a human body before it was brought to us for our expertise, we know we are expanding treatment options for patients that often have few to begin with.”

The scientific environment provides constant inspiration. “I work with an amazingly capable, multidisciplinary team of people and I get to learn from them every day,” she added.

Military veteran Brett Bascom learned a new language while at COCC — but not in a French, Spanish or Mandarin classroom. In an “Introduction to Programming Class,” in the college’s computer information systems department, Bascom discovered a knack for “speaking” code. “I think I was only two weeks into the class when I started writing a program to help automate some tasks at the family business,” he recalled.

When he received his Associate of Applied Science degree in computer and information systems, he was already working at Bend-headquartered Kollective, a worldwide tech firm, as a quality assurance engineer. Today, he works in the company’s software development section.

“I mostly build and maintain the proprietary test automation framework for Kollective,” he said, adding that he had no formal computer experience prior to attending COCC. “I fell in love with programming, and having something I was so interested in turned my life around. I’ve always enjoyed working hard, but now I have something I wake up excited to work on every day.”

Find out how to put your own career into gear. 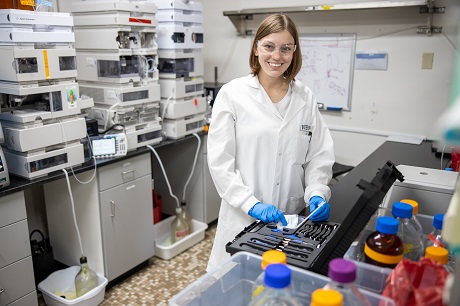