Dr. Shirley I. Metcalf, president of Central Oregon Community College, has announced her plan to retire as of July 1, 2019. Metcalf, who has worked in higher education in Hawaii, Washington and Oregon for 46 years, is only the fifth president in COCC’s nearly 70-year history. She has been at COCC since 2011, and has served as president since 2014.

Metcalf is credited with providing stability and a strong sense of community, both on and off the campuses of COCC. She oversaw the completion of both a strategic plan and a facilities master plan, the successful accreditation mid-cycle report, and was instrumental in helping the college secure its largest ever federal grant, a five-year $2.25 million U.S. Department of Education Title III grant aimed at increasing student success during the transition to college and in developmental math and writing courses.

“Dr. Metcalf is a trusted and valued leader in Central Oregon, respected by the board, faculty, staff, students, elected officials, business leaders and our community at large,” said John Mundy, chair of the COCC board of directors. “She is active in local, state and national organizations that promote educational achievement for students, and has brought knowledge and insight from that participation back to the college. During her tenure, she has promoted a culture of mutual respect and openness, which is evident every day at COCC.

“Dr. Metcalf’s success in securing the Title III federal education grant has already yielded measurable improvements in student performance,” Mundy said. “We recognize and celebrate her many successes and hope to continue building upon her accomplishments in promoting student success.”

Metcalf, who will be 67 next week, said the decision to retire was not an easy one. “My time at COCC has been and continues to be the most enriching and rewarding experience of my career,” she said. “As I have said regularly, I love my job serving as the president of Central Oregon Community College.

“During my time in higher education – especially with community colleges – I have experienced how we impact and transform students’ lives, and the positive impact we have on the larger community. I am grateful to everyone at COCC for the energy and commitment they bring to the college on a daily basis,” she said.

“I look forward to the coming year,” Metcalf said. “We have a lot of work to do in more fully implementing the strategic plan and many of the components of the Title III grant. Both will help prepare us for our next accreditation visit, in 2020.”

Under Metcalf’s tenure, the COCC Foundation has continued to grow. The endowment is now at more than $22 million, up from $16 million four years ago. The amount of scholarship money awarded each year has grown from $1.1 million to $1.6 million during that time. Metcalf worked with the Foundation and led the 50th Anniversary Celebration of the Bend campus, which included the naming of the Coats Campus Center in honor of the donors of the land for the campus.

In the community, Metcalf has worked closely with local school district superintendents in increasing the opportunities for high school students to earn college credits, and in getting more local high school graduates to attend COCC. The number of College Now courses – classes taught in the high schools by high school teachers but with COCC-sanctioned college credit – has gone from 131 to 183 in the last five years, with enrollment increasing by 27 percent to 1,160. The percentage of recent high school graduates from Central Oregon schools who attend COCC during their first year out of high school is now averaging between 25 and 30 percent.

Metcalf served for several years on the board of directors for Redmond Economic Development, Inc. (REDI) and continues to serve on the board for local nonprofit Better Together, a regional partnership working collectively to improve education outcomes for children and youth. Nationally, she is active in the National Asian Pacific Islander Council, an Affiliate Council of the American Association of Community Colleges. Fewer than one percent of community college presidents are Asian Pacific Islander women.

Dr. Metcalf first came to COCC in 2011, serving originally as dean of extended learning, overseeing the college’s non-credit instruction and the COCC campuses in Redmond, Madras and Prineville. This included the Small Business Development Center, Continuing Education, Professional Development and the college’s programs at the Deer Ridge Correctional Institution. In 2013, from February through June, she served as interim vice president for instruction.

In 2014, in her first year as president of COCC, she was named “Woman of the Year” by The Source Weekly newspaper and selected as one of Bend Chamber of Commerce’s “Women of the Year” nominees.

Prior to coming to COCC, she held the positions of executive vice president for instruction and vice president for advancement at Lake Washington Technical College, in Washington. At Hawaii Community College, she served as dean of instruction (chief academic officer) and dean of outreach. Metcalf attained the rank of full professor in business and held a tenured position with the University of Hawaii System for 26 years.

In 2014, Dr. Metcalf was named one of the University of Hawaii Community College’s “50 Finest” for her contributions to community college education in Hawaii. As part of their 50th anniversary celebration, the UHCC credited her with a lifetime commitment to the community college system and students.

Dr. Metcalf earned her bachelor’s and master’s degrees from the University of Hawaii and her doctorate in education from Northern Illinois University.

Mundy, the COCC board chair, said the board of directors is already working on the process to hire the next president. They are in the process of selecting a search consultant and will soon be appointing a broad-based search committee, to be comprised of representatives from the community, along with faculty, staff and board members. The goal is to have interviews in January or February and appoint the new president by March or April. 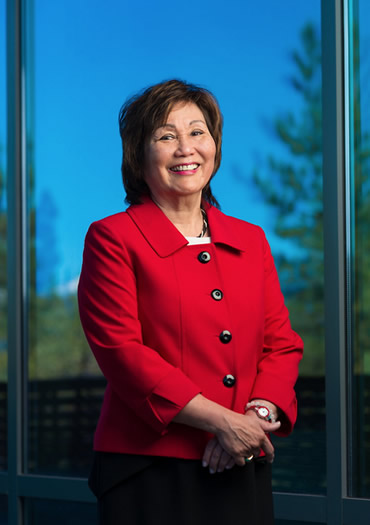