As highway traffic zips across the Crooked River canyon bridge just north of Terrebonne, a group of geology students, in sun hats and daypacks, gathers along the adjacent pedestrian-only bridge at Peter Skene Ogden State Park, staring at a sheer wall of basalt that drops nearly 300 feet to the river below. It’s a place where life at 65 mph contrasts dramatically with a landscape that was slow-cooked by the eons.

Notebooks flipped open, the 22 students of Central Oregon Community College’s (COCC) “Cascade Volcanoes” class study the wall and sketch the varied patterns of the textured basalt. Drawing the mishmash of fractures and facets is a method of analyzing and unpacking the geologic story. Sarah Salaz, from Sunriver, looks up from her scribbling. “It’s pretty cool when you actually stare at it,” she said.

Behind them, off to the east, spired hoodoos punctuate a ridge that rolls south to the outline of Smith Rock State Park, its fins of tuff massing on the horizon. Beyond that: Newberry Volcano. It’s a story with visible chapters.

“This is a lava flow that came from Newberry, 40 miles away,” explained Hal Wershow, assistant professor of geology at COCC. The same 350,000-year-old flow, he added, formed the prominent bench that flanks Smith Rock.

Promoting Earth science literacy (and simply making rocks cool) is the mission of COCC’s geology department, a program that has the benefit of being situated amid a volcanic wonderland. Though operating with a small footprint—just one instructor—it manages to cover a lot of ground.

Wershow, who has interned at the USGS Hawaiian Volcano Observatory and worked as a field geologist at the U.S. Department of Energy’s Los Alamos National Laboratory, teaches six different courses in all, typically three per term. The curriculum includes subjects like Earth’s internal structure, landforms, regional geology of the Northwest and the Cascadia Subduction Zone. The latter is something the instructor views as a “moral obligation” to teach in this part of the country.

“This is a lava flow that came from Newberry, 40 miles away,” explained Hal Wershow, assistant professor of geology at COCC. The same 350,000-year-old flow, he added, formed the prominent bench that flanks Smith Rock.

“From what I understand as a geologist, it’s going to alter our lives more than any single event will in this century, assuming it happens in this century,” he said. As the Juan de Fuca Plate is forced beneath the North American Plate along the West Coast, stress builds at the fault line, pushing upward.

“The Oregon Coast is literally rising—we can measure that,” added Wershow. “Eventually it’s going to snap…and that’s the earthquake.” A tsunami would follow. Landslides would unleash. Though estimates vary on when this could occur, the Oregon Office of Emergency Management says there’s a 37 percent chance that a 7.1+ magnitude earthquake could trigger within 50 years. To that end, all of COCC’s geology classes involve promoting a mindset of preparedness. In fact, this spring term, the student who best documents their readiness will win an emergency “go-bag” assembled by Wershow (experts say that Oregonians should have emergency supplies to tide them over for two weeks).

COCC students can incorporate geology coursework into their chosen degree. Or they can attain an Associate of Arts Oregon Transfer (AAOT) degree that centers on geology, and then pursue a bachelor’s program elsewhere. For that academic path, Wershow recommends taking the required math (calculus) for the undergraduate degree at COCC before transferring on; it saves money and comes with more personal attention.

From hydrogeology to volcanology, the field fans out into many specialties. Student Jenifer Gracie of Bend is pondering a future in petroleum geology. Formerly of Brazil, Gracie relocated to Central Oregon a year ago and is making the ​Cascade Volcanoes class her introduction to the subject. “What got me into this is when I’m flying and looking at all the land formations,” she explained. The bird’s-eye view of twisted canyons and dramatic mountains pulled her in.

Geology has that transfixing effect. It can also be something of a gateway science, a door to a wider world. “Many students take geology for one of their required science courses because they are intimidated by science, and geology seems like the least painful option,” said Betsy Julian, Ph.D., COCC’s vice president for instruction. A former geology professor herself, Julian understands that aspect. She also knows how exposure to the field promotes deeper connections. “As students learn about these systems, they are exposed to data collection and analysis that will make them better able to develop informed opinions on many issues, based on information rather than emotion.”

Out at Cove Palisades State Park, an eye-popping area of bluffs, canyons and rocky layers, the Cascade Volcanoes class assembles beneath a tilted wall of cobble-encrusted sediment, sliced by ancient waters. They sketch once more, then discuss their observations. “It’s been a blast,” said student Mike McComb with a grin, reflecting on the class. “Hal is the fieldtrip dude.”

The dude appreciates the fun side of being immersed in the natural world. And also how landscapes can lead to discovery. “I want students to understand that when you look at a landscape, on the one hand, you can interpret it, and on the other hand, there’s no answer key,” said Wershow. “We come up with a plausible explanation that we can’t prove wrong until somebody comes up with a better idea.” 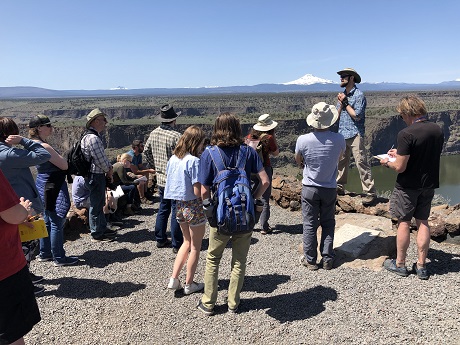