With worldly flavors and extensive industry knowledge, the Cascade Culinary Institute at COCC readies students for a future in food

Inside the custardy cohesion of a rich hollandaise sauce—a marriage of whisked egg yolks, lemon juice and melted butter—there’s an ingredient that’s too often overlooked: time.

“There are a lot of quick ways to make a hollandaise sauce,” explained Thor Erickson, assistant professor and chair of culinary arts at Central Oregon Community College (COCC). “We teach the classic, tried-and-true way that shows students the science of why those egg yolks and butter bond together to form this velvety, wonderfully tasting sauce.”

As Erickson describes the traditional technique—a metaphor, really, for the program’s no-shortcut approach to learning—the sound of clanging mixing bowls drifts in from down the hallway of the Jungers Culinary Center. Outside the window, last season’s sage soldiers on in the dormant herb garden that will later yield a bounty of things like basil and parsley, even some rhubarb and pumpkins.

The contemporary facility, which opened in 2011, recalls Frank Lloyd Wright with its wing-like eaves, exposed timbers and clerestory windows. Kitchen labs, classrooms and a working restaurant, Elevation, provide top-notch training spaces and realistic environments to hone skills. There’s even a well-stocked cookbook library that beckons students to pop in, sit on the banquette bench, and flip for inspiration through titles by James Beard and Julia Childs’ “Mastering the Art of French Cooking.”

COCC’s Cascade Culinary Institute (CCI) offers three different degree paths. “Culinary is definitely our most popular program,” said Erickson, “followed by baking and pastry. And hospitality management, being just a few years old, is in its infancy, but we’re gaining traction.” Within each of those three specialties, CCI also offers a one-year certificate of completion.

The coursework is varied—and tends to be tasty. There’s wedding cake design. And artisan bread baking (which gained added nuance after assistant professor Laura Hagen, a certified executive pastry chef, spent two months last summer absorbing methods from bakers in the French countryside). Students can learn about “Advanced Chocolate Sculpting” and dissect the flavors of Caribbean dishes. They might focus on sustainable cuisine practices, tracing the farm-to-table backstory, or learn the essentials of wine and beverage management. A butchery course puts big blades in action.

In a recent “Culinary Foundations” class, sauté skills are being put to the test. Colorful veggies—deep purple cabbage, shiny carrots, tawny mushrooms and bright green zucchini—are cut, cooked and neatly arranged on a white server as the morning’s competency unfolds. Student Barclay Losse, in his low-profile pillbox hat and white double-breasted jacket, stands with anticipation in front of his “chef” (how faculty are referred to).

COCC’s Cascade Culinary Institute (CCI) offers three different degree paths. “Culinary is definitely our most popular program,” said Erickson, “followed by baking and pastry. And hospitality management, being just a few years old, is in its infancy, but we’re gaining traction.” Within each of those three specialties, CCI also offers a one-year certificate of completion.

“Oh man, these are great,” said assistant professor Wayne Yeatman, seated at a table beneath his towering chef hat and sampling the medley of braised and sautéed vegetables. “There’s still ‘bite’ to them.”

CCI students come with a range of backgrounds and aspirations. Ken Nelson, for instance, now in his first year at the program, is an active-duty U.S. Coast Guard cook selected by the service to attend culinary school. He’ll return to his post in Southern California to be an instructor for other culinary specialists.

Tim Pirisky of Redmond, just out of high school, began formal training with Ridgeview High’s culinary classes. A full-time student, he works as a breakfast line cook at Pronghorn Resort and totes a leather knife bag the size of a bedroll. “After I finish the program, I want to look into getting my business degree,” he said, planning for a restaurateur future. In the short-term, he hopes to travel and learn from chefs overseas. “I want more international training,” he added.

In fact, students with international ambitions can apply for a CCI-sponsored summer learning experience in Europe, now in its fourth year. “We alternate between Belluno, Italy, and Silkeborg, Denmark,” said Erickson. And it’s a true cultural exchange: “We will have 25 Danish culinary and hospitality students from College360 in Silkeborg visiting here the week after Memorial Day.”

Overall, there’s a program emphasis on service work and volunteerism—of food as a way to give back. Students prepare and ladle out close to 100 gallons of different soups for NeighborImpact’s “Empty Bowls” annual fundraiser. And they orchestrate a 400-plate, fine dining feast for the COCC Foundation’s “Meal of the Year” scholarship gala, a test of both logistics and culinary savvy.

“When our students leave here, they can go further, faster,” said Erickson. Graduates are working in a range of places, from Le Cirque in Las Vegas, to Bend’s 900 Wall, to Facebook’s food services in Prineville. One recent CCI grad started her own food cart operation, Jerk Kings, which utilizes some of that Caribbean coursework to pepper the foodie scene in Bend and Redmond with new flavors. 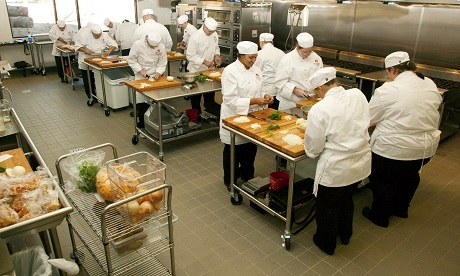