Charged Up for the Future

Only a handful of hybrid-electric cars drove off sales lots in the United States in 1999. Seventeen of them, to be precise. That year, as a new era of autos (led by Honda Insights) started rolling off assembly lines, the U.S. Bureau of Transportation Statistics began collecting data. In 2013—15 years later—consumers would purchase nearly half a million hybrids.

The hybrid and electric vehicle sector continues to swerve the market. General Motors, for instance, announced in January that its Cadillac brand would receive an electric overhaul—part of a fleet of 20 new electric cars that the restructuring company is hoping to ride into the future.

From his auto shop at Central Oregon Community College (COCC), Ken Mays has watched this whole evolution unfold. The automotive technology program director, with the college since 1990, began to see the need for creating a widely recognized service credential—a digital “badge”—for technicians working in the electric-powered automotive world. A new standard for a new industry.

“We’re looking at standards categories right now and looking at a template,” said Mays, who, together with a program counterpart at Rio Hondo College in California, received a National Science Foundation grant two years ago to implement the system. The $779,000 grant (the second NSF grant the two have received) is helping them design and activate this all-new credentialing model.

The aim is to be technology-centric, not manufacturer-centric. With ongoing input from an advisory board, and a newly built website, things are taking shape.

“The idea is to have these 59 lessons,” said Mays in his Bend office, scrolling through a list of one-hour webinars on his computer screen. “We’ve got a pretty good start.” Students, he said, will already have automotive training certificates or degrees. The lessons, with testing built in, will provide an additional standard. At the end of the four-year grant, Mays envisions that the Society of Automotive Engineers will oversee the system. “It’ll go international as well,” he added.

The automotive technology program director, with the college since 1990, began to see the need for creating a widely recognized service credential—a digital “badge”—for technicians working in the electric-powered automotive world. A new standard for a new industry.

Along the way, Mays has created an associate degree at COCC that emphasizes new technology. And he’s used grant funds to help form a network of professional technical institutions in the Northwest, as well as expand channels of recruitment to include women, Latinx and Native Americans.

For now, automotive technology students at COCC are certainly learning hybrid-electric essentials. Classes are held at the Redmond campus’s Technology Education Center, with coursework in computers and electronic programming.

Recent COCC graduate Ted Miller is taking his skill set to Telsa, embarking on the company’s “Start” training program. “I chose Tesla not just to be able to work on some of the best vehicles in the world, but to really take part in Tesla’s mission to revolutionize the world,” he said. A military veteran with prior mechanic training, Miller earned his Master Automotive Certification and an associate degree in automotive technology.

In all, the college offers 15 different certificates, plus the Master Automotive Certification, and two Associate of Applied Science degrees: one in technology in electronics and diagnostics, the other in automotive management. The program has facilities in both Redmond and Bend.

At the Bend campus’s automotive shop on a recent afternoon, students huddle around cars. Ignitions catch and the smell of exhaust tinges the space. Students Ingrid Sanchez and Leith Sneckner are under the hood of an SUV.

“We’re measuring AC current to the battery,” said Sanchez, leaning over the engine compartment. Like Miller, her ambition is to work for Tesla. Sneckner wants to go into automotive management. “I want to open up a shop as an end goal,” he said. “I love challenging myself.”

COCC’s program utilizes conventional equipment, like current-reading ammeters. But the college also uses some cutting-edge gear. Up on the wall, overlooking the vehicle bays, is a shiny device that looks like a behemoth black bumper. The unit, purchased two months earlier, is a $30,000 state-of-the-art alignment system that syncs wall-mounted digital cameras with targets that are clamped onto a vehicle’s wheels. A computerized display provides lightning-fast readings to diagnosis alignment issues—all done in less than two minutes.

In an adjacent classroom, the pace is more relaxed. The environment caters to self-paced studies for nine different courses, including manual transmissions and small gas engines. Several students sit at desks in the quiet space. Among them, Kayla Peckham is troubleshooting a finicky mower engine.

“I’m more of a big engine girl,” said Peckham with a smile, looking up from her work. “But anything you can do on a small engine, you can do on a big engine.” Having moved from Iowa to attend the program (and expand on her existing skills), the student now commutes from La Pine to attend five classes. With her sights set on being a Volkswagen technician, Peckham said the self-paced courses are helping keep things flexible and attainable. Twenty-five percent of the students this term are women—a record high for the automotive technology program.

COCC not only gets future technicians trained up, it gets them plugged in. “We have a co-op work experience of 288 hours of ‘on-the-job,’” explained Mays. “We connect them with a company that’s going to give them the experience that they need.”

For more details on the automotive technology program at COCC, visit cocc.edu or call 541-383-7700. 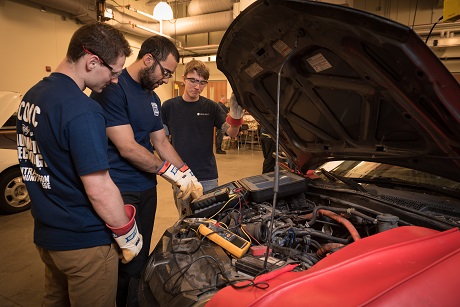