Three skeletons roll into a classroom. That’s not the set-up for some groan-inducing punchline, it’s how an anatomical kinesiology class gets underway at Central Oregon Community College (COCC), as John Liccardo, associate professor in the Health and Human Performance department, arrives with skeletal models in tow. Soon his students are clustered up, gamely involved in a task: They take turns thinking of a bone, then describe its location using anatomical terminology as a way to clue-in classmates.

“I’m looking at something that’s posterior to the sternum…it has lots of muscle attachments,” a female student communicated to her group, slowly spooling out hints. They make guesses, zero in. The interactive lesson is fun and instructive—a bone touched becomes a bone learned. The skeletons look on good-naturedly.

Also looking on is Liccardo, observing newfound knowledge in action. “This class is really fun, people get to move,” he said, alluding to how students’ own body movements help inform their educational process. That “moving” aspect of the class, explained the former NCAA Division I athlete, is a core part of learning for these future occupational therapists, physical therapists and personal trainers, all students of COCC’s exercise science program.

Exercise science is certainly a field on the move. In an era when people are embracing wellness and fitness more than ever, and as health science continually takes new strides, the role of exercise science has gone increasingly mainstream. People want nutritional guidance. They’re looking to trainers and coaches—with both physical and mental toolboxes at their disposal—to enrich their lives. Physical therapists seem as commonplace in people’s health care orbits these days as doctors and dentists. And as a tidal wave of baby boomers reaches older age, the role of health coaches—from basic fitness to cardiac rehabilitation—is fast expanding.

While math and science skills are fundamentally wired to the discipline, the program also fosters a person-to-person nature. It’s a career track that speaks to athletes, health-minded individuals and those who simply want to make a difference.

Exercise science is certainly a field on the move. In an era when people are embracing wellness and fitness more than ever, and as health science continually takes new strides, the role of exercise science has gone increasingly mainstream.

At COCC, exercise science students can take one of two academic paths: an Associate of Science degree (which also aligns with the pursuit of a Bachelor of Science in kinesiology at OSU-Cascades) or a more generalized Associate of Arts Oregon Transfer degree, an “all-purpose” ramp-up to a bachelor’s degree in a variety of subject areas. Physical therapy, for instance, is a field that requires a bachelor’s degree.

Coursework includes wellness coaching, sport psychology and training theory, among others. The college’s resources for learning include an advanced physiology lab, where local athletes of all caliber come for fitness evaluations and students get hands-on experience with VO2 max monitoring and athlete assessments.

It’s an education that delivers on two levels: Students not only learn skills applicable to their chosen career, but they also discover good-health concepts and practices to assimilate into their own lives.

That reality played out in one of Jenny Cruickshank’s recent wellness coaching classes, where the assistant professor unpacked—and quickly discarded—the notion that failure is a bad thing.” “I’m going to encourage you to think about the ‘failing forward’ idea,” said Cruickshank, a nationally board-certified wellness coach, encouraging her students to view swings and misses as a platform for growth. Part of her lecture for the day centered on the power of the bucket list, how a written set of goals can trigger a far-reaching wellness boost.

New data, she shared, suggests that people with depression and chronic health issues, even traumatic brain injuries, are benefitting from the goal-oriented technique. Yes, crossing things off a list releases feel-good dopamine and serotonin, she added, but the mere intention creates a deeper impact.

“Just writing it down validates it,” said a male student. “Yes!” Cruickshank replied. With her open, encouraging manner (and an occasional high-five), Cruickshank was making an impression.

For former student Ally Galloway, who owns and operates BodyRock, a training and fitness studio, that impression has endured. “One of the things that makes the program so strong is their dedication,” she said of the exercise science faculty. “They’re so knowledgeable and so invested in what they are teaching. They care about their students, and their students’ success, long after the classes end.” 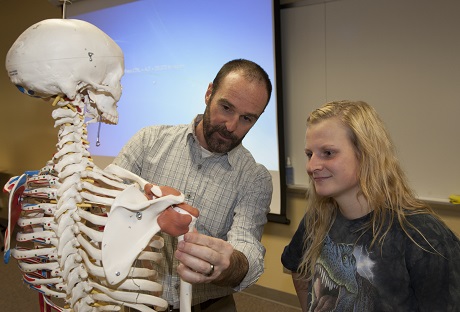