A Prescription for a Promising Future

Things are looking extra healthy in the field of pharmaceuticals.

In just the past three years, the U.S. pharmaceutical market has grown, on average, 10 percent annually. That’s due in large part to the number of baby boomers—individuals born between 1946 and 1964—who are reaching older ages in an era of advanced medical technology. By 2030, boomers are expected to double the country’s senior population to a robust 70 million.

As the drug industry surges to support quality of life and treat things that come with senior living, such as chronic disease, the need for support services has grown too. The pharmacy technician field has ridden that wave: According to the U.S. Bureau of Labor Statistics, it’s a profession expected to grow by 12 percent within the next decade.

Pharmacy technicians are integral to connecting patients with treatments. They prepare and package medications, from drugs that battle cancer to those that punch out a persistent cold. They calculate prescriptions—mixing, measuring, weighing—and fill orders. Techs help map out a patient’s overall medication plan to safely and effectively integrate all prescriptions. It’s an interactive, on-your-feet kind of career that blends technology with people skills.

At Central Oregon Community College (COCC), the pharmacy technician program is now in its ninth year. It’s the only community college east of the Cascades to offer this credential.

“This is a great way to be in the medical field but not have direct patient care all the time,” said Shannon Waller, the program’s director. “It’s a good living, and you can go anywhere in the United States,” she added, referring to the national certification achieved through the one-year program.

Currently capped at 16 students, the program launches a new cohort each fall, with some of the classes offered in hybrid and online format to serve remote students. Come spring, the students are ready to embark on two practicums where they apply their skills in industry settings: 120 hours in a retail pharmacy setting and 120 hours in an institutional pharmacy setting. They also do a brief stint with PacificSource Health Plans for an insurance perspective. By the end of the school year, graduates of the program are workforce-ready.

The “office” for a pharmacy technician might be at a drugstore or in a hospital. Some work in home health or in medicine compounding. Waller herself previously worked on an Air Force base.

On average, an industry wage in the state of Oregon for a pharmacy technician in 2016 was $37,990 (nationwide, the mean salary for pharmacy techs was $32,990). Waller explained that some regional employers are routinely in contact for new hires. “There’s a huge demand,” she explained.

That’s part of the reason Adriana Tapia, of Prineville, chose the career path. “I found it to be an interesting field that’s also on the rise for job opportunities,” she said. And now, one term in, Tapia has seen a side of it that resonates beyond employment security. “I’ve really enjoyed learning what medications affect what parts of the body,” she added. “I’ve been able to apply what I have learned to my personal life and that makes me feel great about myself.”

Each state has different laws when it comes to working as a pharmacy tech. When students first start the COCC program, they get their Oregon Board of Pharmacy’s technician license. It lasts two years and allows them to work in Oregon. At the end of the program they sit for their national exam and, with a passing score, can go to any state with their certification to seek employment; some states require additional licensing.

“There are so many ways you can go into it,” added Waller. “So if you’re more of a people person you can work in a retail setting, and if you like mixing IVs and helping patients get better you might like a hospital better. Or, if you just want to be on the telephone and talk to patients, insurance might be the way to go. There are so many opportunities and different avenues you can go down.”

The potential for career advancement includes everything from supervisory roles to added certifications for offshoot specialties, such as being an IV technician or working in chemotherapy.

“You will not be without help if you chose to participate in this program,” said pharmacy tech student Jessica Heinrich, of Madras. “If you are willing and able to put in the time, you will not be disappointed.”

Learn more about this and other COCC healthcare programs at an upcoming information session. For more information on Central Oregon Community College, visit cocc.edu or call 541-383-7700. 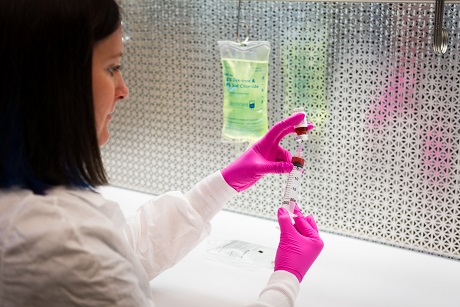