JAMES HALLIDAY
James, an enrolled member of the Confederated Tribes of Warm Springs, graduated from COCC in 2012 with an associate of arts Oregon transfer (AAOT) degree. He then transferred to OSU-Cascades where he received a bachelor's degree in social sciences in June of 2014.

Going to school was something James always wanted to do. But after he started a business and then a family, life seemed to get in the way. When his business didn't succeed he looked at it as a chance to finally attend school.


His goal was to work with his tribe and his education at both colleges gave him a solid foundation. He took classes in economics, community policy and the environment. James encourages all Native people to take these courses as many of the programs within the reservation system include these elements.

Going to COCC and OSU-Cascades offered James the opportunity to stay close to his home and family. He thinks his son, who is in his second year at COCC, would not have gone to college if he hadn't watched his dad.

"I feel like I'm a role model now because you influence people around you. I'm doing positive things and I have two or three friends who are planning on returning to college." James also sees his son has a positive role model on his sphere of friends.

"My advice to upcoming students use the tutoring lab!" James credits the Tutoring Center with his success in math. He also encourages students to develop a game plan before attending school so they don't waste time and money.

James has achieved his goals. He currently works for The Confederated Tribes of Warm Springs and one of his children is in school, with the others to follow shortly. It is easy to see that James has also become a role model for the many people he comes into contact with day after day. 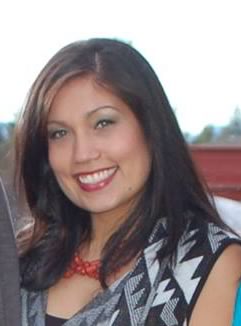 Before Casandra worked for Natural Resources with the Confederated Tribes of Warm Springs, she lived in Portland working for a non-profit and missed her home. She decided to return to Warm Springs and soon realized that if she wanted work that was more satisfying she needed a college degree. In June of 2014 Cassandra graduated from COCC with an associate of arts Oregon transfer (AAOT) degree.

For Casandra, going to school was part of an overall change in her life. "I have three kids, I wanted to set an example." While in school she and her kids did their homework together, instilling the idea that education is important.

Returning to school was not easy, even though Casandra wanted to set an example for her kids and gain skills for a new career. She took 12-14 credits per term and tried to schedule her classes during the day while her kids were in school. Transportation was an enormous challenge. During her last year at COCC, she spent two and a half hours per day driving back and forth between Warm Springs and Bend. "The commute gets so old that some students just quit doing it. If you're already on a budget, it's really hard."

What really helped Casandra achieve this milestone was finding people in the same situation. "We could help each other out. My advice is to reach out."

Pursuing an education is not over for Casandra. She is currently taking online classes from OSU-Cascades with the goal of graduating in Summer 2017 with a bachelor's degree in Natural Resources.