The Redmond campus's 20th celebration, Oct. 11, 4-6 p.m. 2017, at COCC-Redmond. Join us for hors d'oeuvres, commemorative bags, guest speakers and a showcase of the automotive, manufacturing, science and vet tech programs.

There's a hefty, toolbox-sized car battery sitting in a gleaming automotive bay of the Redmond campus's new Technology Education Center, hooked up for an energy test, its many wires bundled like dreadlocks. Students of this hybrid automotive class a relatively new offering at COCC are getting set to run diagnostics and test its capacity.

Just a short distance away, anchoring the northern end of the Redmond campus, a massive solar array that fills the space of three football fields is collecting the day's rays, and, in turn, powering the work happening back in the auto class. It's an incredible display of renewable technology in action and a telling demonstration of how innovative the campus has become.

This 2017 version of COCC's Redmond campus, with four buildings and forward-looking programs, has come a long way from its 1997 self. But the beginnings of the campus reach back even further, involving a community effort and even a nod from Congress.

Brainstorming began in 1991, when Deschutes County, the city of Redmond and COCC started looking at the possibilities for a college training facility in Redmond. There was a COCC presence near downtown at the time, in a leased, two-classroom building on Forest Avenue. But the city was primed for a true campus, something with growth potential. It was envisioned as a "North Campus," a counterpart to Bend. This centralized spot would help serve Oregon's heartland; Redmond, after all, was long ago nicknamed "The Hub," a reference that dates back to the state's pioneer days.

"I remember the push by the community to bring the campus to Redmond," recalls Eric Sande, executive director of the Redmond Chamber of Commerce, who at the time was working for the Redmond Economic Development Assistance Partnership. "Having a community college or university opportunity was a huge issue with businesses looking to relocate or expand in Redmond," he adds.

An initial hurdle was somewhat unusual in the world of siting a college campus: obtaining clearance from the Federal Aviation Administration. "Redmond was looking at property across the street from the airport," says Alan Unger, former Redmond mayor and now a COCC board member, "and worked with Congress to remove the airport patent,' which restricted its use." This freed the city to pass the property to COCC: an industrial parcel in the form of about 25 acres of High Desert blank canvas.

Carol Moorehead, now retired from her role as the college's dean of extended learning and Redmond's campus coordinator, remembers how the opportunities particularly the night classes made an immediate impact. "The students were exceedingly thankful," she says. "A lot of students were working, and they were trying to do this as they're working. They were thrilled."

The Shape of Things 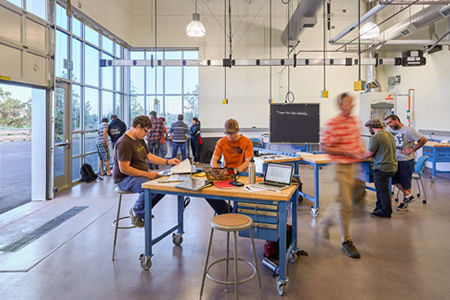 With early momentum, the campus evolved quickly. In 1998, a new building that packaged a range of community resources opened its doors. This one-stop center for self-improvement housed agency offices for the Oregon Employment Department, the Department of Human Services and the Central Oregon Intergovernmental Council. Meantime, class ranks grew.

From the outset, the community weighed in on the shape of things, helping to script the campus's story. There was a push for degrees local students wanted to earn an Associate of Arts Oregon Transfer degree close to home and manufacturing training was likewise identified as essential.

"The reason manufacturing came," adds Moorehead, "was from a survey we did to determine what program should come here, as far as a professional technical offering." The college folded this information into its programming and the Manufacturing and Applied Technology Center (MATC) opened its doors in 2001, giving the specialties of welding, machining and industrial maintenance a base of operations.

Over the next few years, core student services were slowly brought in. In 2004, for the first time, the campus featured a financial aid specialist; the next year, an academic advisor maintained a once-a-week presence. Pretty soon, Redmond began offering placement testing. The fledgling campus was growing, gaining a reputation, and seen as a valid option for students pursing an associate's degree. And that's precisely when the recession triggered.

But the Redmond campus was in a rhythm by then. It helped absorb waves of struggling folks looking for new direction. In 2007, enrollment expanded by almost 40 percent. "When the recession hit, we were flooded," Moore remembers. The tide eventually subsided, but the campus was permanently on people's radar.

A new era began in 2014, when the Redmond Technology Education Center, the product of a 2009 bond buoyed by voters, introduced an innovative, 34,000-square-foot facility for technology-centered programs. Designed to be an adaptable, flexible facility, this building, with its retractable doors and shifting walls, gives the campus great footing for what's to come in the way of technology. "If a new industry comes to town," says Unger, "COCC is ready to do its part in training a workforce and the other needs of that industry." The building serves as home to a craft beer lab, the veterinary technician program, automotive technology and manufacturing.

You'd be forgiven for overlooking the Redmond campus on first pass. Its narrow footprint is tucked into an industrial area of town where the buzz of local companies mixes with the occasional rumble of aircraft taking off and landing at Robert's Field.

But that outside impression falls away as you turn in from the side street, enter the campus itself, and find yourself in a place of maturing shade trees, buildings linked by a path, outdoor benches, even a walk-up coffee hut. Students spill out from class into the parking lot, holding books and water bottles, heading on their way.

A glance around campus on a random week can yield a diverse educational experience: classes in American literature and industrial sensors, in veterinary microbiology and art history, and in marketing and welding. You can venture from algebra to yoga on one small campus. "In the coming decades, Redmond will become a comprehensive campus," says Tina Redd, Redmond campus director. "We'll not only offer degrees responsive to community needs, but we'll also offer the full range of student services."

Back in the automotive bay, Ken Mays, program director of automotive technology, is bringing the next generation of automotive specialists online. The newly offered associate's degree features stackable certificates in hybrid-electric and electric vehicle technology. "We're prepared for the future of transportation," he says. It's a new world and the college is ready.

The sun beats down and the solar field soaks it up. Students come and go. A lot has transformed in 20 years—technology, industry, the city, the campus. Moorehead reflects on the milestone. "We created a nurturing environment for learning," she says. Some things don't change.