The Oregon State Board of Nursing recently approved a program expansion request from Central Oregon Community College’s (COCC) nursing program, enabling the state-accredited training to increase its annual cohort size from 48 to 56 students. The change will be implemented with this year’s admissions process, and introduce the larger cohort size beginning in fall term 2020.

“We’ve had medical facilities all over asking for this, we’ve had students asking for this,” said Julie Downing, instructional dean at COCC. “Every year, we have to turn away eligible candidates.” While opening up eight extra spots each year in the two-year program — where the pool of annual applicants has risen by 20 percent since 2017 — the change is also a response to a widening RN shortage in the U.S.

Due to a sizeable boomer generation reaching older age, coupled with retiring nurses from that same generation, the need for new nurses is spiking nationwide. According to a projections report from the U.S. Bureau of Labor Statistics, an additional 371,500 nurses will be required by 2028.

There is a “maldistribution” of nurses in Oregon, reports the Oregon Center for Nursing. The agency maps the statewide supply of RNs and finds that some areas — urban and rural alike — are in serious need. Multnomah County, for instance, the state’s biggest urban county, actually maintains the smallest ratio of nurses-to-population, at a one-to-68 ratio. Wasco County, a rural region, has one nurse for every 89 people.

“We’re extremely proud of our nursing heritage here at COCC,” President Dr. Laurie Chesley said of the program, which began in 1954. “The program provides the very best in nursing instruction and is now on track to receive national accreditation later this year. This cohort expansion is a win for both students and health care in general.”

“Over the last five years, we have had a 95% first-time pass rate on the NCLEX exam,” said Jane Morrow, chair of the college’s nursing program. Morrow said the national average for passing the National Council Licensure Examination, or NCLEX, is 88%.

This is the nursing program’s second expansion in just over a decade, with the first occurring in 2009, making it a 40% program increase in the past 11 years.

COCC’s nursing program is based at the Bend campus in the Health Careers Center, a state-of-the-art building built in 2012 with a voter-approved bond measure. 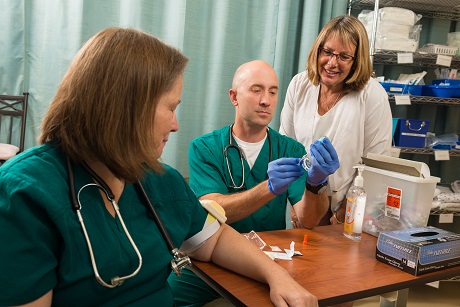