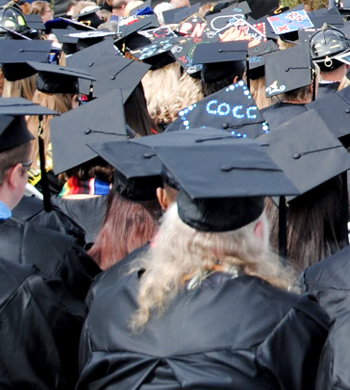 When you haven't set foot in a classroom in more than three decades, that first step can seem like a quantum leap. But Prineville resident Shellie Piske is grateful she took it.

"Even though I hadn't been in any form of school for 30-plus years," shares Piske, "I learned that I am more than capable of learning new things and obtaining that long-awaited degree." No lapse in time can take away from that feeling of accomplishment.

Piske received her Associate of Applied Science degree in small business entrepreneurship this June. The degree, she said, that will give her a clearer vision for running and expanding DaySpring Solar & Water, the Crook County-based business that she owns and operates with her husband. And it's proof that education, at any interval, is always a perfect fit.

Piske is one of nearly 50 students from Crook County to receive a degree or certificate in the 2016-2017 academic year. The sheer number of students crossing an academic finish line inspired the college to host a first-ever graduation celebration at the COCC Crook County Open Campus in June. A congratulatory address from President Shirley Metcalf reflected on students who earned their education in nursing, health information, early childhood education and business administration, among other fields.

Not far away, in neighboring Jefferson County, a similar celebration honored some 80 students who achieved a degree or certificate this academic year. Grads have earned their stripes in a range of studies, including nursing, welding and health information, with more than a few attaining broad-based Associate of Arts Oregon Transfer degrees (AAOT).

It was an honor, says Jeremy Green, campus administrator, to highlight their wide-ranging achievements. "To have so many students from right here in Jefferson County was something to celebrate," he says of the diverse, accomplished group. Shaiandra Saunders is one of them.

Growing up in the Warm Springs community, under the care of her grandparents, Saunders embraced their guidance of making education a priority, its power of creating a better life for oneself. And she began to envision herself in college, working in the medical field, perhaps serving her tribal clinic.

Having a son at a young age budged the timing of things, but Saunders persevered with her plan. She recently graduated from the college with an AAOTthe first in her family to earn higher education distinctionand is determined to finish her schooling in the medical field and realize the plan of making a difference at the tribe's clinic.

"I wouldn't have done it without the support of my family, friends and my COCC family," Saunders explained. "My experience at COCC was great, the instructors were thoughtful and encouraging, the staff always made me feel welcomed, and always had a smile on their face."

Hundreds of Crook and Jefferson county residents have benefited from their local campuses since they first opened in 2011. And the counties have embraced and enjoyed the success of their many graduates. Together, that shared future looks mighty bright.