There's an art infusion happening in Redmond, Madras and Prineville. Fine Art Instructor Ian Factor is helping to launch some new curriculum offerings at Central Oregon Community College (COCC), and, in the process, is bringing a stronger art pulse to the communities as a whole.

Born in Boston, Factor gravitated to the arts at a young age. He traces his traditional training to the age of eight, when he began attending programs at a number of revered Massachusetts-area art schools. After earning his bachelor's degree at Syracuse University, he later received his Master of Fine Arts from the New York Academy of Art, and is versed in many mediums and artistic disciplines, from drawing and painting to welding and graphic design. His creative career is layered with 25 years' of teaching experience (a passion first set in motion when he trained to be a martial arts instructor) and numerous overseas instructional posts.

As a young college grad, Factor lived in the Rockies, chasing open-sky inspiration and deep powder days. He booked an early (and unique) gig with Burton Snowboards: They liked his submitted snowboard graphics, sure, but could he lend them his stylish penmanship to grace some of their materials? This would evolve into a position as the company's senior designer and illustrator. Additional commercial work followed, and led to stints with Timberland and Converse, among others, adding momentum to his growing art career.

Factor's work has shown in galleries and museums throughout the country and around the world, and his teaching positions have landed him in locales like coastal Maine, the Dominican Republic, southern China, the hills of Tuscany and the boroughs of New York City. When an opportunity to teach in Oregon arose (at Western Oregon University) in 2014, he happily shifted gears from the New York City art scene and made the move west, where he'd always vowed to return, joining COCC and OSU-Cascades two years later. He stepped in front of his first COCC class this past term.

"I'm really, really excited about bringing arts programs to these campuses and communities," shared Bend-based Factor, making the long haul twice a week. He acknowledges that his first Prineville drawing and composition class, as a brand-new offering, was only expected to generate an enrollment of maybe four students16 signed up.

The interest and enthusiasm is certainly gratifying. But it also fuels his ambition of helping to establish more of an art studies presence throughout COCC, to be a contributing force in the process. "It's been a really good class, and I've gotten some really good turnaround," he said of the student development, many of whom had never taken an art class before.

A recent 3-D project tested the students with what he admits were some complicated concepts. "Everyone did a lot of work," Factor raved. "I was really impressed with the amount of time and energy and commitment that those students invested in this projectsome of them came in with these really awesome, large-scale, intricate and involved pieces. And it wasn't just the craftsmanship, but it was the concepts that they were connecting."

Factor's approach to his lessons is to minimize the one-way lecture relationship with students and strive for an interactive class. "I'm trying to create a constant dialogue in the class," he explained. It seems to be flowing. A group of visiting high school students that recently sat in on the class, he said, responded to the energy and were visibly engaged. Something that really inspires Factor is when he has a student taking an art class as a requirement, who's maybe a little detached from the subject matter, and suddenly, one day, they "open their eyes" to the lesson at hand and apply themselves with a newfound focus.

For the spring term, the art offering in Madras is Drawing I, while Redmond and Prineville will feature Drawing II. "Illustration is the most viable bridge between fine arts and commercial design, the commercial art world," he conveyed. For budding artists hoping to storm the art scene or make a living as an artist, this is sage advice. But even for students who are simply looking for a creative outlet or to fulfill a credit requirement, there's much to learn from Factor. He'll be glad to have you in the dialogue. 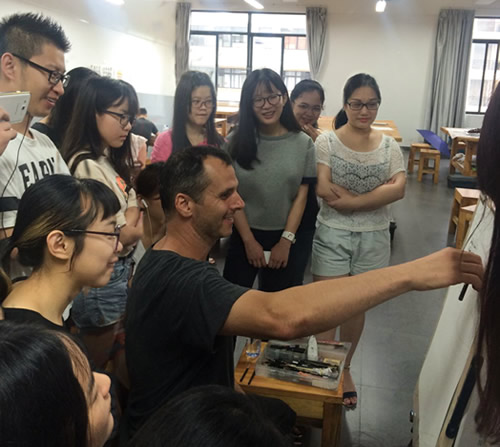