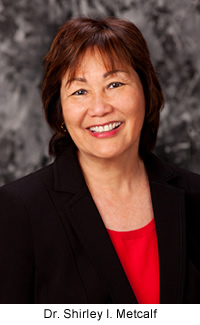 The Central Oregon Community College Board of Directors has named Shirley I. Metcalf as the college's fifth president. Metcalf has been serving as interim president since September 2014. She began that role after Dr. James Middleton retired with 10 years of service at COCC.

Laura Craska Cooper, COCC's board chair, describes Metcalf's leadership skills as including "listening, being responsive, following through and empowering those she leads. She also builds consensus, is open-minded and she has an infectious enthusiasm and energy that makes everyone want to jump on board and follow her on a journey leading to student success."

Metcalf has been at COCC since 2011 as Dean of Extended Learning, overseeing the college's non-credit instruction and the COCC campuses in Redmond, Madras and Prineville. This has included the Small Business Development Center, Community Learning, Professional Development and the College's programs at the Deer Ridge Correctional Institute. In 2013, from February through June, she served as interim vice president for instruction.

Prior to coming to COCC, she held the positions of executive vice president for instruction and vice president for advancement at Lake Washington Technical College. At Hawaii Community College she served as dean of instruction (chief academic officer) and dean of outreach. Metcalf attained the rank of full professor in business and held a tenured position with the University of Hawaii System for 26 years.

Metcalf earned her bachelor's and master's degrees from the University of Hawaii and her doctorate in education from Northern Illinois University.

In 2014, Metcalf was named one of the University of Hawaii Community College's "50 Finest" for her contributions to community college education in Hawaii. As part of their 50th anniversary celebration, UHCC credited her with a lifetime commitment to the college and students.

She was recently honored as one of Bend Chamber of Commerce's "Women of the Year" nominees.

She serves as a board member for the National Asian Pacific Islander Council, an Affiliate Council of the American Association of Community Colleges.

Metcalf is an avid skier and enjoys traveling with her husband, Wayne.