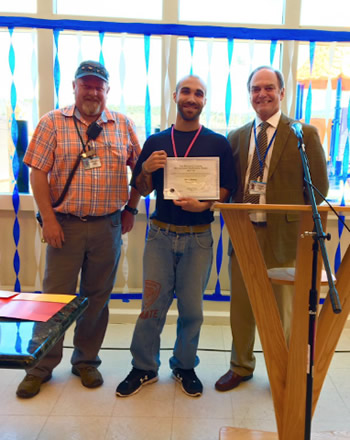 COCC provides educational services to inmates under a contract with the Oregon Department of Corrections. This includes adult basic education classes, GED test preparation and a college credit program in welding. According to Janet Narum, education director at DRCI, this year's ceremony recognized 97 GED graduates and eight welding graduates. It's the highest number of GEDs earned this academic year at a prison in the state's penitentiary system—with a program half the size of many counterparts. COCC employs two full-time Adult Basic Skills instructors who receive assistance from inmate tutors.

"The Education department at DRCI has been very successful in helping inmates achieve their General Education Diploma," said Jerry Schulz, dean of Extended Learning at COCC. "The confidence that this achievement instills helps inmates pursue further education or apply for jobs as they return to our communities upon release. When inmates gain immediate employment or enrollment in college courses, the likelihood or returning to prison is greatly reduced."