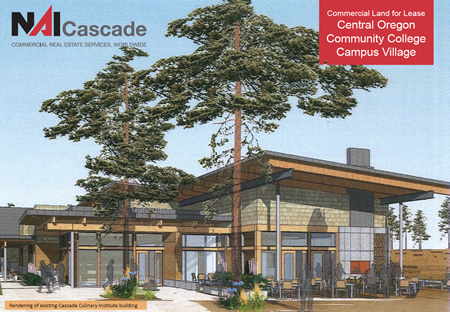 NAI Cascade, a member of the worlds premier managed network of commercial real estate firms, announced today that it has been selected to represent the leasing of COCC's Campus Village, located in the corner of NW Shevlin Park and NW Mount Washington Drive, in the development of a 32-acre mixed-use parcel on behalf of William Smith Properties, Inc. (WSPI) and Central Oregon Community College (COCC).

COCC, owner, and WSPI, master developer, intend to lease the land to developers to create an endowment-type income stream for COCC's future. The vision for the development is to foster and encompass COCC's mission, which is open access, achievement of student success & community enrichment while providing quality, accessible, lifelong educational opportunities. The Campus Village will consist of the vacant land south and east of the existing Culinary Institute. It will be designated for the commercial activity within the village, as well as businesses and housing that benefit COCC and surrounding community.

Andie Edmonds, Partner, Principal Broker of NAI Cascade stated, We are excited and committed to serving COCC and WSPI in this unique development, and we feel certain that our experience, market knowledge, and enthusiasm for the project will achieve the owners and developers goals. No team is better equipped or prepared to address the requirements of this development. We are delighted to have been considered to join such a prestigious team and the opportunity to work on such an important addition to COCC's and Bends community.

Central Oregon Community College, the oldest two-year college in Oregon, was founded in 1949 as part of the Bend School District. It is the longest standing community college in Oregon. The College District was formed in 1959 and officially established as the Central Oregon Area Education District by a vote of residents in 1962 and provides comprehensive college services to the residents of its 10,000-square-mile district. The College's main campus, which consists of 26 buildings, is located on the western edge of Bend and its location affords spectacular views of the mountains from nearly every point on the 201-acre campus. COCC had an enrollment of 16,723 total students in 2014-15, and recently opened a new 330 bed residence hall.

William Smith Properties, Inc., developer of the Old Mill District, engages in the acquisition, sale, development, and management of rural and small community real estate. The company was founded in 1985 and is based in Bend, Oregon.

NAI Cascade works with clients with multifaceted needs who seek expertise, creativity, and responsiveness in their commercial real estate investments. Strong ties to the local community and a global reach as a member of the NAI Global network, provide a holistic understanding of business cultures and economic environments.