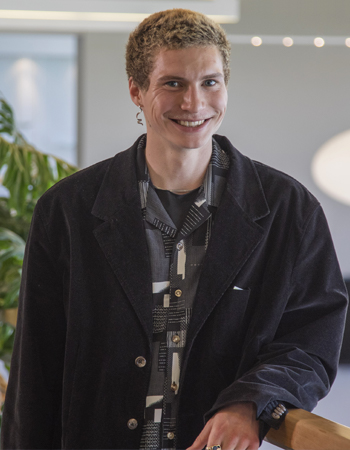 Poverty and homelessness once threatened to derail Elijah Hart's future. Growing up, he and his family often didn't have basic daily necessities. But now on a full ride to Lewis & Clark College — and immersed in neuroscientific research — Hart reflects on his time at COCC, and in particular his Foundation scholarship, as a guiding light.

"It reiterated to me that higher education would serve as my 'declaration of independence,' of sorts, from poverty and its cyclical axis," he shares. Hart, whose upbringing was "riddled with instability," struggled in high school.

Things began to turn around when he met Lindsay Buccafurni, COCC's former admissions coordinator, during a recruitment event at his Corvallis school. "Her kindness and honesty spoke to me," he recalls. He signed up for the Oregon Promise, enrolled at the College, lived in Wickiup Residence Hall and soon became a student ambassador. He would travel to Barcelona with the study abroad program and later go on to become a Ford Family Foundation scholar.

"I truly came into the person I am today," says Hart of his COCC years, graduating in 2018 with an associate degree focused on psychology. He is now completing an advanced degree in psychology and pre-medicine, and readying to apply to MD/Ph.D. programs.