Central Oregon Community College’s (COCC) 13th annual Season of Nonviolence, which extends from January through March each year, culminates with “Building Power and Change for Native People,” led by Savannah Romero of IllumiNative, which explores research and strategies to confront misconceptions about Native Americans, on Zoom at noon on Monday, March 8.

Registration for “Building Power and Change for Native People,” presented in partnership with the High Desert Museum, is required to attend and can be done via this webinar link or by visiting cocc.edu/seasonofnonviolence. Live captioning will be available.

IllumiNative works to transform how Americans and institutions think about and engage with Native people. Romero is a member of the Eastern Shoshone Nation and a recent graduate of New York University with a master’s degree in public policy and public affairs. She previously worked at the National Indian Education Association and for the U.S. House of Representatives, specializing in tribal policy and Native education.

COCC’s annual Season of Nonviolence is a series of free public lectures, interactive discussions, film screenings and reading groups co-presented by the college’s office of diversity and inclusion and the COCC Foundation’s Nancy R. Chandler Visiting Scholar Program. It celebrates the philosophies and lives of Mahatma Gandhi, Martin Luther King Jr., César Chávez and Chief Wilma Mankiller in the name of creating a more peaceful world. 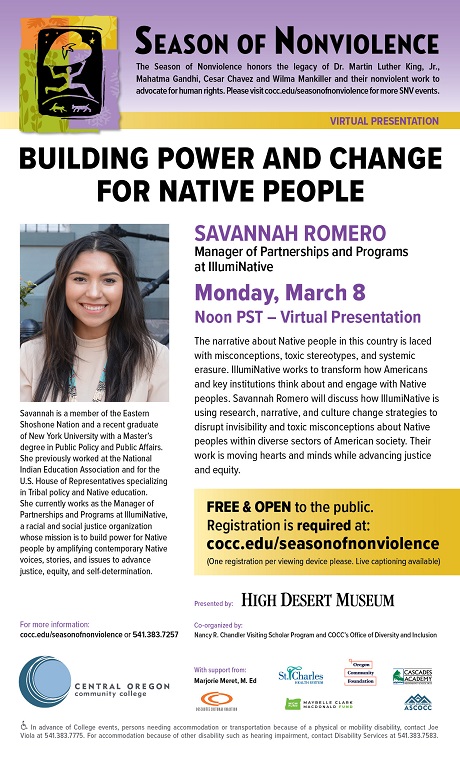