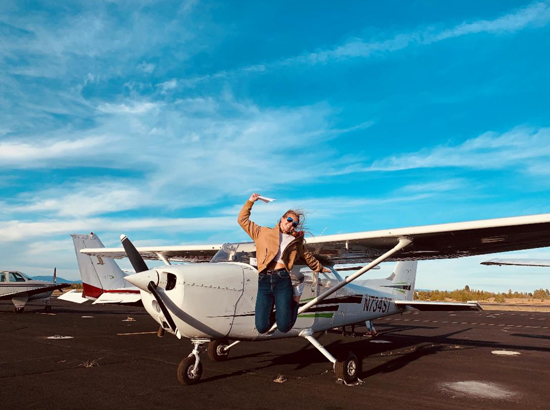 Gravity seems to be losing its grip on Elexis McAllister. A former ranked snowboarder who competed at the state and national levels throughout high school — including taking home a gold medal in the soaring halfpipe contest at the Oregon Interscholastic Snowboard Association state competition — McAllister, also a kiteboarder, is now gunning for higher heights.

“I wasn’t sure what I wanted to study,” admits the former Hood River resident on life after high school. She had already trained to become a volunteer firefighter, but sought something that promised new experiences and distant sights. While considering a career as a flight attendant, she began to think bigger — and more toward the front of the plane.

“I found myself becoming more and more intrigued with piloting,” she says. After an entry flight in Hood River, she got a taste of the open skies, felt the pull. “I still wasn’t 100% dedicated to the idea of being a pilot until I did my first solo. The feeling of being in the air felt so free and right. I knew from that day that this is the life I wanted.”

Now earning her Associate of Science degree, McAllister plans to transfer to Embry-Riddle Aeronautical University and earn a bachelor’s degree in aeronautics. Beyond that, she intends to teach as a certified flight instructor or maybe fly corporate or private aircraft while accruing her 1,500 flight hours (required by the FAA) in preparation to becoming a commercial pilot.